Bugs N Bees is one of the titles in developer Novomatic’s Gaminator selection of slots, and it is now available for online play, whether players just want to play it for fun, or wager real money. The familiar beeps and bloops of casino slots accompany the action, but an unusual accordion riff celebrates the wins.

That isn’t the only musical touch; the Bugs N Bees Scatter symbol is a musical note, and the piano-playing ladybird is also an important symbol. Bugs N Bees plays on five reels with three rows each, offering 10 variable pay lines and bets per line ranging from 2 to 500 coins. Although the symbols are bright and cheerful, Bugs N Bees does not bother with too much of a back story. The reels are simple beige strips against a green grassy background, and all the rest of the artwork is focused on the symbols themselves.

The four higher-value symbols are all friendly bugs: caterpillar, a dragonfly, a beetle and a bee. These icons all begin winning prizes for two matches or better. The caterpillar, dragonfly and beetle all win an identical 10 coins for two of a kind, but the dragonfly and beetle will win an impressive 1,000 coins for five matches. In addition, five matches for the beetle triggers a free spin. 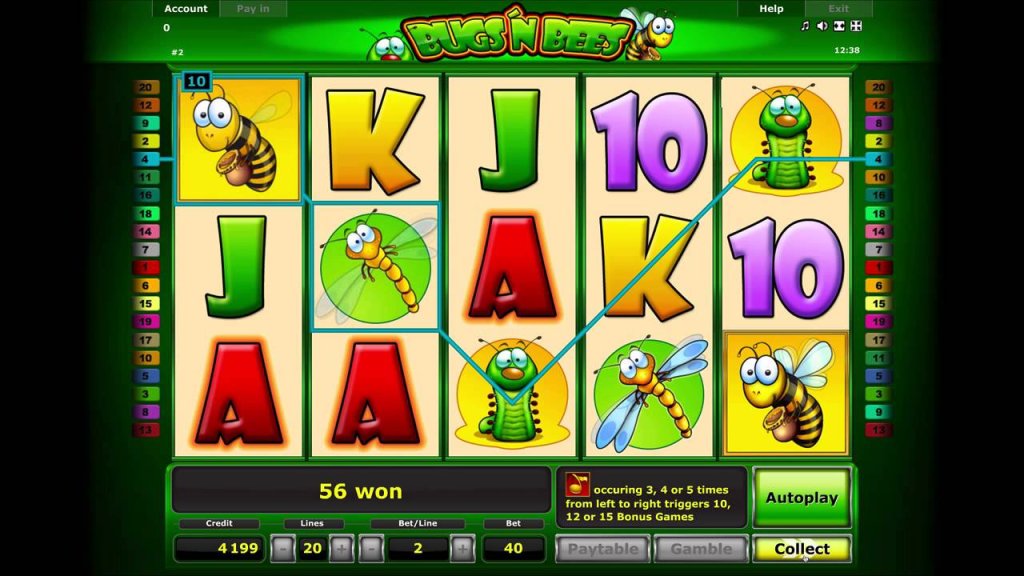 The bee is also the Bugs N Bees Wild icon, able to replace any other symbol, apart from the Scatter and the ladybird, to create extra winning pay lines.

The Bugs N Bees Scatter is a golden musical note, and three, four or five appearances anywhere on the reels will activate a round of 10, 12, or 15 free spins. These cannot be re-triggered during the bonus round, but the combo of three, four or five Scatters also wins the player an instant prize: 100, 400 or 1,000 coins.

The ladybird at her piano is the most unusual symbol in Bugs N Bees. It only pays during the bonus free spins round, but in that round, players only need one ladybird icon to win 60 coins. Every time another ladybird icon occurs during free spins, it is paid double the previous ladybird win.

Bugs N Bees also has a Gamble feature, so players who like risk can take a shot at doubling all their less significant wins.